A Knight In Shining Armor

Posted on June 14, 2010 by dave@cunixinsurance.com

Dr. Ballard made the cover. The current issue of Cleveland Scene featured a story about Robert Ballard, M.D. It appears that Dr. Ballard, age 69, was recently fired. This was not the first time he was fired or defunded, just the most recent and, in his mind, most surprising. Scene depicts him as a good doctor, a caring physician, a practitioner committed to Wellness. He just wants a salary. Is that so awful? Forty-three years since his graduation from a Cleveland medical school and he still hasn’t grasped how and why he gets paid. In essence, he is the poster grandparent for single payer health care.

I bring up Dr. Ballard because of Scene’s cover. There, in four color, is the unemployed doctor dressed in a lab coat walking his dog. I have developed a real appreciation for lab coats.

I was in China for nine days this past April. My tour took me to Beijing, Shanghai, Suzhou, and Hangzhou. I was at the Great Wall (amazing pictures), a Ming Tomb, and the Buddhist Temple LingYin. Other cultural/shopping destinations included a jade factory, a silk factory, and a Cloisonné factory. You get the idea. We also stopped in the offices of the purveyors of Traditional Chinese Medicine. 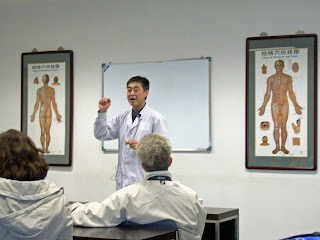 The doctor explained the efficacy of Traditional Chinese Medicine and we were each given the opportunity for a free exam. No blood tests. No sample jars or paper cups. The doctor diagnosed each person, one at a time, by simply taking the patient’s pulse. Then he prescribed the appropriate herbs each inevitably needed.

The doctor took my pulse and asked about my blood pressure medication. “None”, I replied. He was baffled. Me? I was totally relaxed and trying hard not to laugh. I love a good sales pitch. No blood tests. No tests at all. Why was he wearing a lab coat? Our doctor was in costume for his American audience.

My fascination with lab coats can be traced to the recent health care debate. My local Congresswoman, Marcia Fudge, was hoping that her vote was going to be news. It wasn’t. Our Congressional Representatives, even those in safe districts, need to make the six o’clock news now and then, if only for their egos and fundraising. The “White Coat Doctors”, Doctors Organized for Health Care Solutions, were ready to play their part. This is the group that instructs its members to keep their lab coats in their cars and to be ready at a moment’s notice. Their job is to show up at the press conference, coats on, and to nod approvingly. It took tens of thousands of dollars of education for these people to be stage props. But if you call them, they will ride in, like knights in shining armor.

6 Responses to A Knight In Shining Armor